Today we are highlighting one of our favorite jewelry and Judaica designers- Emily Rosenfeld! Her designs are simple, timeless and yet whimsical. She is also the sweetest and we love working with her, so we wanted to know more, and share a little more about Emily with you.

Here are a few of our favorite Jewish Mother's Day Gifts for Mamalah, Grandma, Bubb The name “hamsa” comes from the Hebrew word for the number five, “hamesh.” In Judaism five also refers to the five books of the Torah, the Hebrew bible. In Jewish culture, sometimes the hamsa it is called the Hand of Miriam, after Moses’ sister.

The hamsa is the traditional symbol for the "hand of G_d" and is said to provide protection against the "evil eye," other peoples jealousy. This image is popular among the people of North Africa and the Middle East, and is sometimes called the "hand of Miriam," referencing the sister of Moses and Aaron or the "hand of Fatima" in Arabic cultures. The Hamsa motif is very popular in Jewelry and has really gone mainstream American. Hamsa art to hang on the wall is very popular too.

This piece makes a great decoration for the table, or even your wall. Lazercut from stainless steel with delicate touches by hand, this trivet is mounted on acrylic feet to protect your table.

The pomegranates are a symbol of fruitfulness. It is the perfect addition to the modern Jewish home.

Regina Allen's Gold Filigree Hamsa Set includes a necklace that is 18k gold filled, with a hand formed clasp, amethyst stones, and glass beads. The chain is 17" and the artist can adjust it for you up to 18". The hamsa pendent is 1" long by 3/4" wide.

The earrings have amethyst stones and glass beads as well. Earrings are 2" long from the top of the ear-wire with a 1.5" drop from the ear lobe. The charms are each 5/8" long by 3/8"

Purchase together or separate from ModernTribe.

Our bestselling hamsa is the bendel bracelet with the hamsa charm. Bendels are the infamous "red strings" adorning the wrists of the Hollywood elite. The red string, symbolizes blood and the life force and is supposed to offer the wearer good luck. So the bendel + hamsa is double lucky.

See all hamsas on ModernTribe.com.

ModernTribe has spawned its first marriage! Jill (Editor) and I (Jeremy, Director of Affiliate Programs) are engaged.

After we'd dated for about two years, and several months after Jill knew we should get married, I too realized that. We'd planned a trip to Jill's alma mater, William and Mary, so that seemed like a nice occasion for the proposal.

My alma mater, Miami University, had a tradition that if you kissed under the Upham arch at midnight, you'd get married. I wondered if William and Mary had something similar, so I asked Jill in general terms about campus traditions. She mentioned one, then said there was another but she would not tell me about it. I looked online and confirmed my suspicion: legend has it that if you kiss on the Crim Dell bridge, you'll get married.

Jill had told me she wanted to help pick out the ring after we got engaged, so I thought a little gift would be nice. I chose ModernTribe's hamsa with two golden birds (kawaii!) to represent us. It arrived in the nick of time! 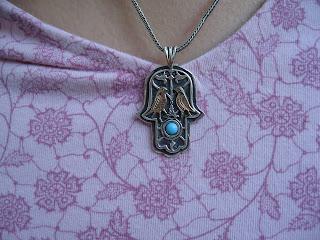 At William and Mary, it was a nervous day (for me!) of walking around the campus. Finally, we made it to the bridge. We took pictures then kissed...and kissed...and kissed...I was mentally all set to propose, but hadn't realized how awkward kneeling would be. After yet more kissing, I thought it'd be less awkward if I took her hand as I knelt. I knelt and my little spiel was unremarkable, but the look on Jill's face was total shock. When I asked her if she'd marry me she said simply "yes" and we went to sit down and recover. She asked, shaking, if I'd known about the tradition and I told her yes. I gave her the hamsa and she loved it.

Now we're planning the wedding for this fall. Wish us luck! 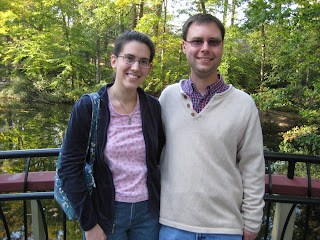