Those of you who keep kosher likely know Susie Fishbein's series of kosher cookbooks, the first being Kosher by Design. This February, Susie is coming out with another book: Passover by Design. Even those of you who don't keep kosher may want to add this book to your library for its modern seder settings and unique recipes. Recipes include Thai quinoa (a berry that has the taste and texture of a grain) and giant zebra fudge cookies (zebra stripes are so in right now). And check out this table setting which includes individual seder boxes complete with all the necessities for seder participants. No more reaching across the table for the matza or maror -- you've got your own stash in front of you. The box even has a sake flask and tea towel for the ritual handwashing. 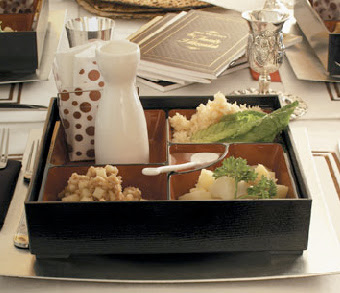 Passover by Design is scheduled for release on February 28th. You can reserve your copy at ModernTribe.com for 20% off the cover price and we'll ship it to you as soon as it arrives.

You can see more of a preview of the book here.

Thanks for the clever and modern ideas Susie! The Tu B'Shevat seder began as a Kabbalistic Jewish mystical practice in the 17th century. Ecologically minded Jews have adopted Tu B'shevat as a time to honor conservation and sustainable agriculture. (I bet Madonna celebrates.) The seder pretty much consists of drinking wine, eating fruit, praising G-d for creating these things, and reminded ourselves that we are stewards of the Earth. One way we drive home the point is by eating carob. Carob is indigenous of the land of Israel and it takes a special meaning because of how long it takes to bear fruit: up to 70 years. "Why plant a carob tree if you won't live to eat its fruit?," an old man is asked in a Talmudic tale. The old man replies that it is for his children and grandchildren. We must take care of this world for the next generation.

Along with carob, it is traditional to eat the "seven species", which are fruits of the earth mentioned in the bible and native to the land of Israel: pomegranates, dates, barley, wheat, figs, olives, and grapes. Also, participants get to drink four glasses of wine ranging from white to red. So, for example, you'd start with a Chardonnay, moving to a White Zinfandel (those morally opposed to white zin can obstain), continue with a Pinot, and end with a Cabernet.