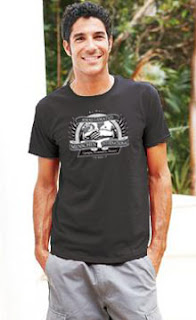 The Amalgamated Menschen International T-shirt celebrates your mensch by declaring him Upright, Honorable, and Decent. On the back, the shirt directs, "Be One!," because, shouldn't we all?

Best gifts for the Zionist Dad

Instead of kitsch, this Independence T-Shirt is design-forward and a serious Jewish t-shirt. California apparel designers, Threaded Heritage, include Israel's declaration of Independence behind the lion of Judea, Atzmaut (Independence), and 1948.

In 66 CE, the Jews rebelled against Roman rule and began to mint their own coins, the shekel, as a sign of their independence. The coins in this pair of cufflinks are cast from a half-shekel that dates to the first year of the revolt!

Best gifts for the Jewish Dad who bucks the trend

Is your dad handy despite his heritage? Then make him a member of the Union of Jewish Handymen with this t-shirt by Jewnion label and accessorize him with tools to get the job done: the hammer bottle opener (that also functions as a hammer!) and the BBQ Tools grilling set which even includes a TAPE MEASURE!

If he had the time, would your dad hug trees and save bunnies? Then he may chuckle at himself represented in Israeli plush: Vigo who frees whales, eats grass, drinks dew, and wears recycled clothes. Plus, any eco-dad can use these: great-looking grocery bags for guys + an ice-worthy eco-cup!

Is dad a geek at heart? Speak the inner geek with a Science Quiz clock, an LED Dinosaur Kit, or the Equal Measure measuring cup so he can make pancakes with a tyrannosaur’s brain of flour and sugar equal to the water in a cumulus cloud the size of the bus.

Is dad on the go this summer? Equip him with an Israeli designer Funtastic Plastic Passport Cover, a universal plug adapter, and Cohen-hands (Vulcan) USB stick to carry his data.


Whatever you choose for your Chosen dad, enjoy Father's Day with him on Sunday, June 29th, 2011!

As you've probably already heard, ModernTribe is hosting the Matisyahu/ModernTribe Sweepstakes this month, through November 30.

Because of our involvement with the sweepstakes, I've been kinda really getting into the Chassid, Reggae, Hip Hop, Beat Box, mega star. Here are three very entertaining videos. Enjoy.

Congratulations to Randie K. and her husband Larry of Portland, OR for winning the Cool Jew Papa's Day Giveaway!

Once again, we are really touched by the thoughtful answers to our question about what makes your special man a cool Jew. Each entrant get's a $10 gift code for ModernTribe.com. I have tried to contact each of you individually. If you haven't heard from me, please email me for your code: Jennie@ModernTribe.com.

The reason my husband is the coolest Jew is that he wasn't a Jew when we met. In fact, I am not sure that my favorite Oregonian knew any Jews before we met! But I can tell you, after 7 years of marriage and two beautiful Jewish daughters, never was there a finer husband and father. He goes to services because he wants to, not because I tell him to. He's sad it's the summer because Mishpicha Minyan is over until the fall. He reminds me to light candles. He spent hours with me, pouring over name books to pick out the perfect Hebrew names for our children. He may not be Jewish by birth but his spirit sure is.

Seven Mensches and two Mamalahs have contributed over $240 worth of gifts to giveaway to one lucky guy. Comment on this post and answer this question:

"What makes your dad, brother, cousin, friend or husband a cool Jew?"

A winner will be chosen from the answers and announced on Father's Day, Sunday, June 21. 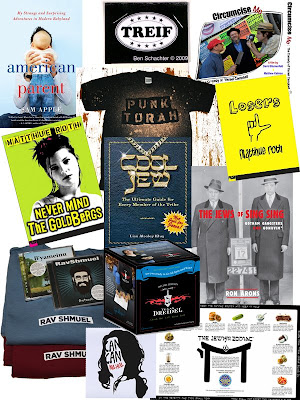 * Author Lisa Alcalay Klug's book Cool Jew: The Ultimate Guide for Every Member of the Tribe

(Please make sure your email is available through your Blogger profile. If you are commenting anonymously, you must email us with your comment so that we know how to contact you if you win! contact@moderntribe.com)

Check back here or sign up for our Newsletter to be notified of the winner on June 21! (No purchase is required to enter. This contest is open to residents of the U.S. and Canada.)