Suri Holmes Cruise : Green Doggy Backpack + Kitty by Manuella
A child's backpack shaped as a dog or cat to contain a snack, extra clothes, and other important items. The bag can be carried as a backpack, handbag or connected to a stroller with its adjustable handle. Cotton corduroy. Made in Israel by children toy designer Manuella, this is the perfect backpack for the first day of school!

Choose: Yellow or Red or Green Doggy (The Suri Bag), or Green Kitty.

Paper Dreidel
At ModernTribe, we believe that dreidels are not just "Jewish tops". Rather, they are works of cultural art.

This papercut dreidel is hand-assembled by artist Melanie Dankowicz.

An intricate lasercut work of art, signed, and numbered, it is elegantly displayed in a rounded glass dome (5" x 7.5") with a black painted base.

The perfect gift for someone who wants high quality, hand made Judaica with touches of old world antique elegance.

Hanukkah Couture Cards - Singles or Boxed Set
Aaron Potts N.Y.C. creates greeting cards that transport you to a world of high fashion runways and exclusive designers. The perfect Hanukkah card for the fashion maven, the style purveyor and the lover of art and culture.

The individual cards are called Hanukkah Darlings with two beauties surrounding the menorah. Inside the card reads, "Have a fabulous Hanukkah!" 5″ × 7″ Linen card comes with an envelope and metallic seal. All in a clear, protective sleeve.

The boxed set of eight are the Hanukkah Couture design with the single lovely lady. Packaged in a clear box with black grosgrain detailing, each 5″ × 7″ set includes the following: 8 cards (1 design) – 8 envelopes – 8 metallic envelope seals.

Inside the card reads, "Happy Hanukkah!"
From ModernTribe Jewish Gifts

This week, we are featuring some exciting wood products for the design enthusiast who wants to bring nature into their home. These wonderful gifts are perfect for the neo-folk/urban primitive/Americana fan.

Wooden Kiddush Cups
On a search for new kiddush cups we wondered, "could there be a kiddush cup that reflects an earthy, eco-centered approach while at the same time holding true to modern design aesthetic?" Well, we found it! These cups are hand carved with love and are perfect for someone who likes the neo-folk or craftsman style. Enjoy Shabbat with your choice of style.

Hand carved and one of a kind.

Craftsman Ladybug Tzedakah Box
This sand-blasted, hand-painted maple wood tzedakah box with Swarovski crystals is both neo-folk and completely modern. The delicacy of the carving on the front of the box with touches of pink, blue and green make this box a treasure for a child.

What I love most about the video is what is not in it: no ridiculous caricature of the Orthodox Jewish man with peyas, dressed in a black hat and long coat, no yiddy-diddly-do music that you find accompanying most funny Jewish videos, no nose jokes or money jokes or jokes about mom.

The video is fresh, modern, and fun -- like the game.

How do you play the dreidel game? 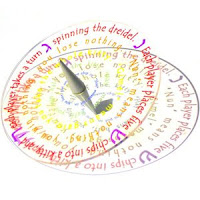 Here are basic instructions for the dreidel game, a traditional Jewish Hanukkah party game. Each player starts with the same number of pieces of gelt (chocolate coins); we suggest 10. In a pinch, pennies also work, but then you can't eat your winnings!

The game begins with each player anteing one piece of gelt into the pot. Going around the circle clockwise, each player takes turns spinning the dreidel. If it lands on:

Gimel
...the player takes all the gelt in the pot.

Nun
...the player receives nothing; next player spins the dreidel.

Shin
...the player puts one piece of gelt into the pot.


Each time the pot is emptied out, each player puts in a piece of gelt, and the dreidel game continues.

If a player has no gelt as a result of spinning a Shin or anteing, he or she is eliminated from the dreidel game. The game continues until only one player remains; or at a set time, the players total up their counters, and whoever has the most gelt wins. Enjoy eating your gelt!

You can even conveniently remind your friends of the dreidel game rules in card form.

What is a dreidel?
A dreidel, or in Hebrew svivon, is a traditional Jewish four-sided top. When you spin it, the dreidel falls over, and whichever side is up is your dreidel spin.

Back to our trip to Israel... While in Jerusalem, you'll likely find yourself on Ben Yehuda street, the major night-life and shopping district. Off Ben Yehuda on Moshe Solomon Street we found Gaya, a store full of games and puzzles, many of them invented and handcrafted in a Moshav (a cooperative similar to a kibbutz) called Hagor. We stepped inside to find the store full of young adults browsing the hundreds of different interlocking, string, and stacking puzzles and the friendly staff demonstrating some of the original strategy games. My husband played a game called, "The End of the Track," played on a chess board, with blocks that move like Knights but they have ball "heads" that move like Queens. I bought the interlocking gun puzzle which can be reformed into a dog. Haven't attempted it yet. Then, of course, I had to purchase the dreidel roulette set...