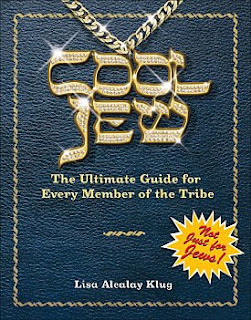 Award-winning author Lisa Alcalay Klug's "Cool Jew: The Ultimate Guide for Every Member of the Tribe" was released to the eager masses this week and we thought, what better forum for a book on being a cool Jew than The Chosen Blog! So Sheebsters and Heebsters, if you're down with lox, know your Jewish geography, and can't start your day without a little Manischewitz, read on for a sneak peek at the book!

The Chosen Blog: Oy! This really is the whole megillah on being a Cool Jew! This must have been a progressive work over years and years! What, or maybe who, inspired you to write this book?

Lisa Alcalay Klug: First the what: a few articles I wrote in late 2005. One was for the San Francisco Chronicle on how cool it is to be Jew in the Bay Area. Another was for the Forward about eight nights of kitsch of Chanukah gifts. What these two articles shared was pride in Jewish culture, shmaltz and a reverent irreverence. Once I formulated that into the idea of a Heebster Handbook--Cool Jew's Hebrew name--I knew I had the makings of a book.

And here's the who: my parents. My dad is an Ashkenazi Holocaust survivor and my mom, who is from Panama and the daughter of Israelis, is a descendant of the Sephardic chief rabbi of Sarajevo. My parents' rich Jewish experiences took root in other countries and cultures. And Cool Jew grew out of all the ways I've sought to create meaningful Jewish experiences of my own. My father's legacy during my childhood, "never, ever be ashamed that you're a Jew," is infused into my book. It's a 250-page antidote for Jewish self-hatred.

CB: How did you go about researching the book?

LAK: You could say that some of it, I've always been researching because I love where Jewish and pop culture intersect. And there are tons of examples of things I've been noticing and collecting over the years. Once I started the book, I went to a lot of festivals, concerts, launch parties and other events. A barrage of new ideas, albums, kitsch and more hit me almost daily.

CB: Did you write "Cool Jew" with anyone in mind? Or is it for Jews of all streams and those of the honorary persuasion?

LAK: You could say I'm an Ashkefardic Neo-Chasidish Shomeret Shabbat Carlebachian Post-Labelficationist Sheebster. And my family includes many other types of Yidden. Just as we are so many different kinds of Jew, so is my book. In other words, it's for everyone, including Honorary Heebs, like Christine, my non-Jewish editor, who was the book's first buyer, and my sister-in-law, who is happy there is finally a fun and entertaining way to understand the mishegas.

CB: You cover a lot of classics like "Jewish Geography," but some of this stuff is completely off the wall! Where did you find it or how did you come up with the more unique stuff, like deciphering which vegetables and animals are of the Jewish variety?

LAK: Certain things in the universe just feel Jewish to me. Because it always expresses two opinions, I think of the Push-Me Pull-You from "Dr. Doolittle," for instance, as the "Tevye of the Jungle." All those National Geographic penguins suggest "The March of the Hasidim." And zebras are like living, breathing tallit stripes grazing on the African savannah. Maybe this is what happens to your mind when you grow up with a mom who speaks like Ricky Ricardo and a dad who speaks like Dr. Ruth.

CB: Will there be a Cool Jews II?

LAK: There will G-DASH-D willing, be something. For me, writing a book is like a Pringle, or as my father would say, a kosher pickle. Who can stop at just one?

CB: What was your favorite morsel in "Cool Jew"?

LAK: I have a bunch… One of my favorites is the "Certificut of Circumcision" at the end of the book. You literally give the book a bris by cutting out a specific page to represent the removal of all self-hatred from your Yiddishe neshama. (See p. 219.)

CB: Is this hipster Jew revolution merely a cultural fad or do you see this J-evolution sticking around?

LAK: Our world is blessed with so many amazing Jewish artists, activists, educators and entrepreneurs. They literally fill up the extensive "Heebster Jewke Box" guide to Jewish music and "Da Tribe Online" directory of community resources in the back of Cool Jew. I'd say it looks like this Adam & Eve-olution is going to be here for a while.

CB: With more than 200 pages to the guide, can you provide the lazy with a short sentence or two on what it really means to you to be a Cool Jew?

LAK: Being a cool Jew means being comfortable in your own skin, knowing where you come from and expressing pride in who you are. When you're a Heebster you don't have to work hard to be cool. You just have to be Jew!

CB: Any final words for our readers?

LAK: I'd love to hear what your readers think is cool, Jew. I'm also collecting images of the Cool Jew book found around the world. The best ones get posted on my blog! Please get in touch and send photos on to lisa (at) cooljewbook (dot) com ... Until then, a l'chaim in your punim!

Purchase Cool Jew: The Ultimate Guide for Every Member of the Tribe and all the kitsch featured in the book here at PopJudaica.com.