The first paragraph of today's JDub newsletter had a couple of words that intrigued me: "remix" and "chanteuse" and a link to Onili's single Games from her upcoming album First Kiss. I have a thing for electronica and super thing for female electronica... and Israeli female electronica? You can imagine. I've been searching for it for months! And check out this cute album cover of Onili with a shotgun - it's so Israeli fem-punk, love it! 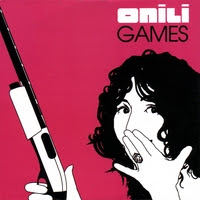 You can hear her music at her website: www.onili.com

You can buy her single Games at CDBaby who describes Onili's music as:

"Girly Electro-PoP with rock energy played by a live band." and goes on to tell us:

Both French and Israeli, Onili is a mix of two cultures sharing her time between her little Israeli mountain where she runs her studio and Paris where she grew up...Onili's lyrics are stories of her life through her emotions of love, anger, frustration, conclusions and understandings, with humor and passion.

I can't wait to hear more from and about Onili.