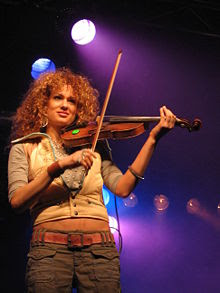 Israeli hip hop violinist Miri Ben-Ari was involved a serious car accident with a UPS truck in New Jersey yesterday.
According to a rep of the Grammy award-winning artist, she was rushed to a local hospital, where she was treated for minor injuries and was later released. Get well soon Miri!

If you haven't heard her music - it rocks! Miri was discovered by Wyclef Jean and has collaborated with artists like Kanye West and Alicia Keys. She released her debut album, The Hip-Hop Violinist in 2005. See her perform here.