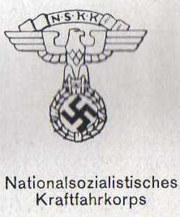 The Web site development firm that is creating moderntribe.com handed over our "Coming Soon" page this week. When I opened the document in Photoshop, I got a message warning that I was missing a font: DIN Neuzeit Grotesk. Sound German to you? Babelfish translated the phrase for me as Modern Times Grotesque. I was a taken aback at how similar "Modern Times" is to "Modern Tribe"--just add "grotesque" (bizarre, absurd...). Because I was ignorant about fonts, I didn't understand then that "grotesque" simply refers to Sans Serif fonts. But the irony had already piqued my interest; I Googled and uncovered some interesting facts about DIN Neuzeit Grotesk.

Neuzeit Grotesk was its predecessor, designed by font source Stemple's Wilhelm Pischner in 1928. It became the standard font for German signs and was so throughout the Nazi reign, too. A quick Google image search found a few specimens of German and Nazi signs using the font (one example at top).

However, Neuzeit Grotesk is nowhere near as dominant or recognizable as Blackletter, a family of fonts including Fraktur, which was adopted as the font of the Volk (people) by the Nazi party.

In 1970 DIN, Germany's Deutsches Institut für Normung (the German Institute for Industrial Standards) made it the standard font for German road signs, as it still is today.

My Web site designers chose a German road sign font for my Jewish Web site. I didn't feel good about this, but how big a problem is it? I wrote to two typographers who have posted intelligently on the Typophile forum (typophile.com). Here are some excerpts from their responses. 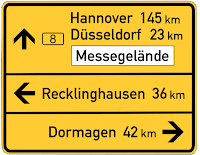 You are right to be concerned about DIN's "bad karma." It was an official lettering design made during the Nazi era, and has been used in autobahn signage in Germany since before WW2. There is nothing particularly "Nazi" about the design, other than its associations. Of course it shouldn't be an issue any more, but human nature is what it is. I don't have a problem with Germans or anything German, but my father for instance, who was a child in London during the Blitz, would never drive a German car or holiday in Germany. And of course, for many Jews the situation is one of the utmost sensitivity, so I really don't think you can afford to risk the situation that even one know-it-all type nerd might cry foul, because, if not a public relations disaster, it would be a nasty situation that could be easily avoided.

From William Berkson, Ph.D., a Jewish typophile, philosopher, author of Jewish Family Values Today, and executive director of The Jewish Institute for Youth and Family, Inc.

Personally, I wouldn't have a problem as a Jew using DIN, as it was created before the Nazi era, and continues to be used after. It really has German associations, rather than Nazi ones.

Like Nick's father, my late parents would never, never buy anything German. However, as the generation actually guilty of murdering Jews is now mostly gone, I personally don't think that attitude is justified any longer.

The chances of your use of DIN being complained about are extremely remote.

So what did I do about my Web site... well, I've largely removed Mr. DIN... but it is still there in places until I can get around to changing it. Those most curious, take a look and see if you can find it.